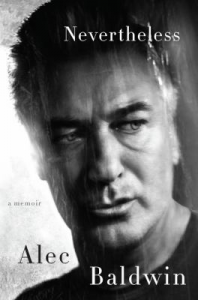 Nevertheless: A Memoir by Alec Baldwin

“Over the past three decades, Alec Baldwin has established himself as one of Hollywood’s most gifted, hilarious, and controversial leading men. From his work in popular movies to his roles on 30 Rock and portraying Donald Trump on Saturday Night Live, he’s both a household name and a deeply respected actor. In this memoir, Baldwin makes public facets of his life he has long kept private. It was a good book, well-written, though I would have liked to have read more about his personal interactions with people he’s known through the years.”
–Renee, Patron Services