Free Mask Program – We are currently out of KN95 Masks. Please check other distribution locations.

Meadows Branch Library is closed for repairs. Please return material to our other locations. Meadows patrons will be notified when holds are available for pickup at the Main Library.

Masks are required in all indoor public spaces for those age 2+ regardless of vaccination status. More about the public health order. 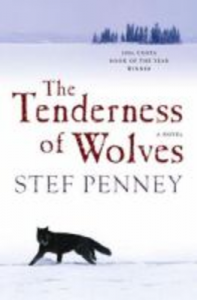 The Tenderness of Wolves by Stef Penney

“I recently reread the 10th anniversary edition of this Costa Award-winning novel and enjoyed it, even more, the second time around. Though some of the plotting might seem superfluous, the prose shimmers and the characterizations ring true. The author emphasizes a concept known as “the sickness of long thinking,” which I interpret as the inability of any creature to forego its inherent nature, regardless of the strength or appeal of other influences. This concept plays out in the relationships between several characters and story arcs, most notably between the mother and her guide. I’m reminded of some striking lyrics by Leonard Cohen, as adapted by Emmylou Harris: ‘So she binds herself to her galloping steed, and he binds himself to the woman in need, and there is no space just left and right, and there is no time but there is day and night… Now the clasp of this union who fastens it tight, who snaps it asunder the very next night, some say it’s him some say it’s her, some say love’s like smoke beyond all repair.’ Part western, part mystery, and part romance, this novel deserves a new round of attention.”–Terri, Resource Services